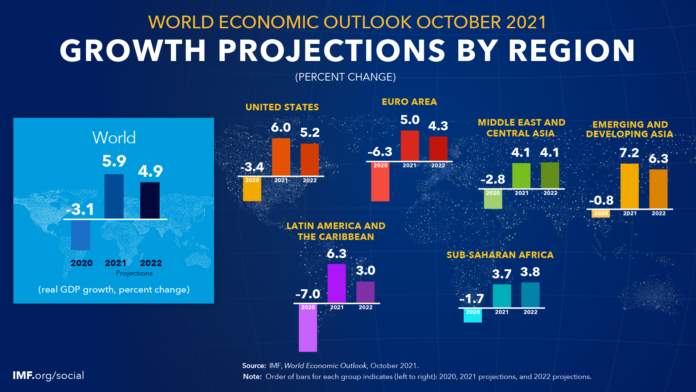 As the year 2021 gradually draws to a close, most Nigerians are not in full mode of the Christmas and New Year festivities. Rather, they are more preoccupied with the thought of more economic hardship that the coming year is likely to bring,

Their apprehensions are coming from a growing likelihood of disturbing macroeconomic indices of Nigerian economy getting worse in the new year due to some policy actions and inactions of the federal government.

The consensus position among analysts is that Nigerians should brace up for tough economic challenges next year as fallout of the planned removal of fuel subsidy. This is expected conspire with rising food prices, worsening foreign exchange crisis, growing unemployment among others to further reduce the purchasing power of more Nigerians.

There are hardly any discernible indices to point to the country’s recovery in the near future as almost every expert opinion points to gloom, with regard to the poverty state of Nigerians.

The latest report from Nigeria Employers Consultative Association (NECA) shows that the incidence of poverty rose by 10 per cent between 2019 and 2020. In the October 2020 report, NECA said the number of citizens in extreme poverty stood at 102 million representing 50 per cent of Nigeria’s estimated population of 205 million.

Managing Director, Financial Derivatives Company (FDC) Limited and a member of President Muhammadu Buhari’s Economic Advisory Council (EAC), Mr. Bismarck Rewane, recently made a more scary analysis, which many see as painting a better picture of the depth of the nation’s trouble.

Rewane said Nigeria remained the poverty capital of the world and listed some develop¬ments that should worry Nigerians, including the falling of total capital importation to $875.62 million in Q2’21, from $1.91 billion in Q1’21, and the crashing of the parallel market rate to N526/$ on Foreign Exchange (FX) supply shortages.

According to him, Nigeria’s second quarter year-on-year positive Gross Domestic Product (GDP) has yet to have a sig¬nificant impact on socio-economic conditions.

“Fastest growing sectors were the most impacted by the (COVID-19) shutdown. They are job-elastic and have the potential to boost productivity. Real GDP (2.7 per cent) is still below potential GDP (8.3 per cent). The economy is still in a recession¬ary gap. Population (3.2 per cent) growing faster than GDP”, he said.

“Nigeria is still the poverty capital of the world: 93.9 million people now live below the poverty line. Youth un¬employment is fast approaching 45 per cent. The misery index is 50.68 per cent. Nigeria is a hunger alert hotspot, according to FAO and WFP. Over 18,000 Nigerians are seeking asylum. Health sector brain drain rising (e.g. about 500 doctors moving to Saudi Arabia).”

Global rating agency, Fitch Solutions, in its Nigeria Country Risk study released recently, predicted that even as the Central Bank of Nigeria (CBN) continues to intervene to support the naira exchange rate, the currency will still weaken from a spot rate of N412.75/$ to N416.00/$ by the end of 2022.

According to the agency, despite the upsurge in foreign reserves, the naira will weaken further – to an average of N428.00/$ – in 2022 as dollar demand continues to rise on the back of the strengthening economic recovery.

“The naira will weaken further – to an average of NGN428.00/USD – in 2022 as dollar demand continues to rise on the back of the strengthening economic recovery”, the study stated.

The National Bureau of Statistics (NBS) recently released the “2019 Poverty and Inequality in Nigeria” report, which highlighted that 40 percent of the total population, or almost 83 million people, live below the country’s poverty line of 137,430 naira ($381.75) per year.

The NBS report is based on data from the latest round of the Nigerian Living Standards Survey (NLSS), conducted in 2018-2019 with support from the World Bank’s Poverty Global Practice and technical assistance from the LSMS programme. Between September of 2018 and Oc¬tober of 2019, the National Bureau of Statistics conducted the latest round of the NLSS, a decade after the previous one.

According to the United Nations, a person is considered to live in ex¬treme poverty when he or she is living on less than $1.90 per day. This figure is known as the international poverty line.

The World Poverty Clock, a web tool produced by World Data Lab, reveals that 77.9 million Nigerians, rep¬resenting 39 per cent of the country’s 199 million population were living in extreme poverty in 2019. A break¬down of the data indicated that 61 and 11 percent of people who lived in rural and urban areas respectively made up this figure.

However, experts see worsening poverty in event of government going ahead to remove fuel subsidy, which they believe will trigger a sharp rise in the cost of living, housing, transportation, food, services and loss of jobs.

An economist and lecturer at the Lagos Business School (LBS), Dr. Austin Nweze, believes that the subsidy removal will expose Nigerians to a lot of suffering.

“The policy they are making will make Nigerians suffer a lot. The coming year will be tough, Nigerians need to bear that in mind,” he said.

Nweze, who doubles head of Centre for Applied Economics, Pan African University, Lagos, added: “Food inflation will be up to 1,000 per cent. If you add increase in transportation, electricity and many others, what that tells you is times would be really hard for Nigerians.”

“I have always said that fuel subsidy is fueled by corruption. The people benefitting from the status quo will fight back.

“What led to the Federal Government subsidising fuel? Does the circumstance that made that possible still exist? If yes, how can it be solved? How long will it take to resolve this issue?”

Professor of Capital Market, Uche Uwaleke, said the planned removal of fuel subsidy will trigger a rise in the price of goods and services and worsen poverty in the country.

According to him, the subsidy removal, in the short run, “will result in higher costs of goods and services and worsening of poverty.”

High inflation rates, according to him, will “erode the value of the naira which may lead to preference for hard currencies such as the dollar with the attendant pressure on the exchange rate.”

He asked government to “be ready to come up with compensation schemes to cushion the impact of the removal of fuel subsidy on the Nigerian masses.”

According to him, the planned cash transfer of N5,000 monthly to 40 million poor Nigerians to cushion the effect of the subsidy removal, ”does not appear to be an effective way of dealing with the challenge.”

However, in their outlook for the year 2022, analysts at Proshare raised some hope.

They stated: “In Nigeria, we see economic activities normalizing in 2022. As a result, we expect growth to range between 1.3% and 3.7%. Key economic activities to watch out for in 2022 include the electioneering, removal of subsidies, and floatation of the Naira. While we see inflation moderating in 2022, we expect the CBN to remain accommodative.

“However, external pressures could result in rate hikes. Fiscal metrics could improve in 2022 on the back of recovery in oil revenue. However, we hold a differing view on subsidies considering the electoral season. On the external scene, we see room for deprecation in both the official and parallel market.

“However, recoveries in the oil sector and maximization of the e-Naira could help keep the parallel market in check.”