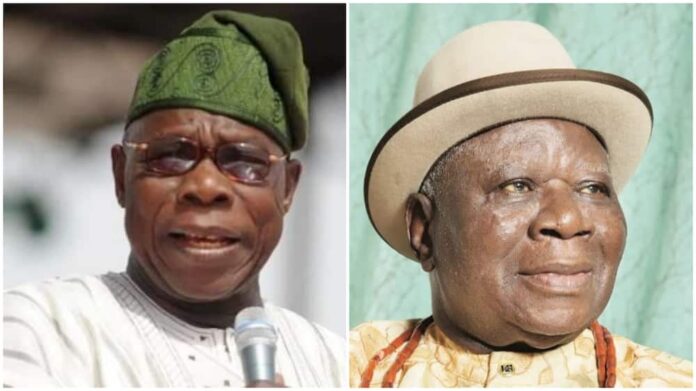 Former President Olusegun Obasanjo has been lampooned for his response to a letter by a Niger Delta leader, Edwin Clark.

In a rejoinder on Tuesday, Obasanjo declared that the oil within the region belongs to the entire people of Nigeria.

On Wednesday, a South-South coalition said from paragraphs 4 to 12 of his reply, Obasanjo emphasized the constitutionality of “the forceful expropriation of Niger Delta”.

The Niger Delta Congress (NDC) chided the ex-Head of State for failing to see the absurdity in centring his arguments on legalities “conceived by members of the larger ethnic nationalities which Obasanjo belongs”.

A statement by the spokesman, Ovunda Eni, noted that in paragraph 13, Obasanjo, not only admitted Niger Delta resources was eyed by both sides during the civil war, he asked the people to be appreciative because the situation would have worsened if the Biafran side won.

Eni, a lawyer, thanked the retired General for the “revelations” which he said aren’t new to the region.

“It important for the Niger Delta people to take note that its territory and people are seen as war booty won and/or lost. This thinking continues to influence the relationship between the Niger Delta and the larger nationalities; not neighbours, not brothers, not comrades, not friends, but war booty.

“In paragraph 18, the former President made it known that he has been a champion of equity and fairness in Nigeria. And in his bid to ensure this equity, he believes that it is necessary to “suppress” ethnic nationalities, or “tribes” in his own words, so the state can emerge.

“What he failed to reveal is that suppressing “tribes” in a state is in reality nothing more than an attempt to create a state where smaller nationalities are silenced, or annihilated so their lands and resources are annexed and controlled by the larger ethnic nations who also make up the state.

“We have seen the ruthlessness with which this suppression as a strategy has been applied, most importantly with the genocide in Odi which left over 10% of the population dead in 1999; a genocide perpetrated by Nigerian troops when President Obasanjo himself was the Commander in Chief of the Armed Forces.

“President Obasanjo stating that he would continue to push for the suppression of “tribes” in the Nigerian state until he “breathes” his “last”, is Obasanjo pledging allegiance to a genocidal ideology. Such audacity can only come when a man has successfully carried out a massacre.

“In subsequent paragraphs, the former President went back in time to cite colonialism and its legal constructs in different ways to derive legitimacy for the injustice that has been the relationship between the Niger Delta and what is currently known as Nigeria right from as early as the colonial era.

“As interesting as this attempt to gaslight the Niger Delta is, what is poignant for the NDC is the subtlety in insinuating that what we currently have operable in Nigeria is an extension of colonialism with the larger groups as the new colonial masters. We choose to not be colonised by any group.

“Most important to the NDC are paragraphs 20 and 21 wherein Obasanjo revealed moves he and some other collaborators from within and outside the Niger Delta are making to once again shortchange the people as has been done within the Nigerian context since 1960, and which he has played an integral part of from the civil war till date.”

Eni said the former leader spelt out the work being done by the Committee for Goodness of Nigeria (CNG) – which he is a part – where Niger Delta representatives are proposing an 18% derivation in CNG recommendations “to those who can take action” ahead of a new constitution before the 2023 elections.

NDC condemned the “insulting” proposition, insisting that agitations have revolved around economic and political autonomy (resource control), contained in the different declarations and charters that have emanated since the 1965 Rumuomasi declaration.

The body recalled that at the South-South Hearing on 1999 Constitution review in Port Harcourt on 27th May 2021, the NDC presented recommendations to the Senate Committee led by Senator Betty Apiafi where 50% resource control or derivation was demanded.

The statement reminded the public that the NDC has been collating signatures of ethnic nationalities’ representatives for the Niger Delta Peoples Charter which asserts the right of the region to control their resources and determine their socio-political future.

Eni vowed that the people will resist any move to foist any constitution that does not take cognizance of the demands of the people as captured in the charter adopted on 8th October 2021 at the Niger Delta Peoples Conference in Yenagoa, capital of Bayelsa.