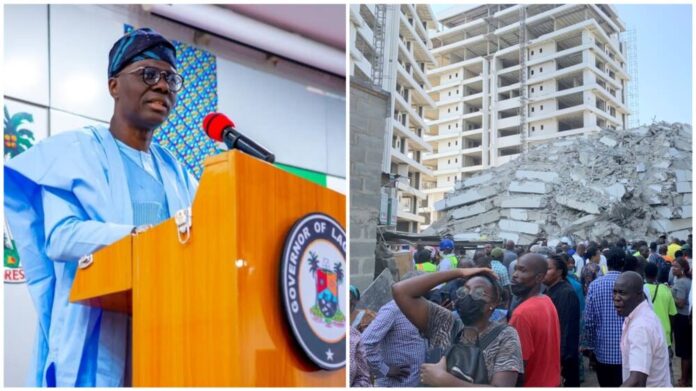 Lagos State Governor, Mr. Babajide Sanwo-Olu, on Wednesday, set up a four-man committee led by the Commissioner for Special Duties, Mr Tayo Bamgbose-Martins, an engineer, as a first step to the implementation of the report submitted by the Panel, which investigated the collapse of a 21-storey structure on Gerrard Road in Ikoyi.

Other members of the committee are Head of Service, Mr. Hakeem Muri-Okunola; Commissioner for Justice and Attorney-General, Mr. Moyosore Onigbanjo (SAN) and his Agriculture counterpart, Ms. Abisola Olusanya, who is an architect.

The Governor constituted the committee after receiving the report of the Panel at Lagos House, Ikeja. It was submitted by the chairman of the panel, Mr. Toyin Ayinde, a town planner. The building collapsed on November 1, 2021.

The Governor said the committee would bring forward a report to be considered by the Lagos State Executive Council.

He commended members of the Toyin Ayinde-led panel for their commitment and quick response to the assignment given to them by the State Government.

Ayinde is the President of the National Institute of Town Planners. Other members of the panel are a structural engineer, Dr. Akintilo Idris; an architect, Yinka Ogundairo; a builder, Mr. Godfrey Godfrey; a real estate lawyer, Mrs. Bunmi Ibrahim and a lawyer, Ekundayo Onajobi, the secretary of the panel.

“Let me on behalf of the people and the government of Lagos State first acknowledge the very difficult task that has been passed on to you and the commitments and the quick response that each and every one of you gave to the assignment. We know that you all have been chosen from different professional backgrounds but you were indeed ready to serve the people for this very important assignment.

“Let me therefore commend and thank you for that exercise. I will be constituting a four-man committee almost immediately that will read through the report and I am giving them the end of next week to get back to the State Executive Council,” Governor Sanwo-Olu said.

Speaking earlier, Ayinde expressed hope that the findings and recommendations of the panel’s report would be implemented by the Government to bring a lasting solution to incidents of building collapse not only in Lagos State but nationally.

Ayinde on behalf of the panel members appreciated the Governor for giving them the opportunity to serve Lagos State Government and the people of the State, noting that the panel spent approximately six weeks on the assignment and submitted the report as well as electronic recordings of all the sections and videos of proceedings in a hard drive to the Lagos State Attorney-General.

The chairman said the panel visited the project site for a general assessment, coordinated the activities of the consultants who conducted tests on the site, received and reviewed documents from relevant MDAs and conducted 35 interviews. It interrogated 91 persons, requested and received  21 memoranda and accessed the home of the late CEO of Fourscore Heights Limited, Mr. Olufemi Osibono, with a view to gathering useful documents.

He said: “The tribunal had the opportunity to access the home of the late CEO of Fourscore Heights Limited in the presence of members of his family, where some documents that were scanned helped in gaining further insights into the case, particularly the processes that led to the construction and eventual collapse.

“The tribunal also hosted the representation of the developer’s company, comprising two legal firms. It is on record that in their first and second appearances, the lawyers expressed the fact that they were external lawyers to the company and had little knowledge about the case in hand.

“Having spent approximately six weeks on this assignment, we now wish to make our submission to the Governor of Lagos State who constituted the tribunal. We need to note however that building collapses is rooted in the collapse of values, morals and ethics, which we need to work on as a nation. We cannot sow the wind and not expect to reap the whirlwind. Therefore, ethics and due diligence need to be restored.”

Governor Sanwo-Olu on Thursday, November 4, 2021, inaugurated the six-member panel of inquiry to investigate the cause of the collapse of the building.

The panel was inaugurated at the headquarters of the Lagos State Waterways Authority (LASWA) at Falomo, where members of the panel had their sittings. Governor Sanwo-Olu also signed an executive bill to give legal backing to the panel during its inauguration.