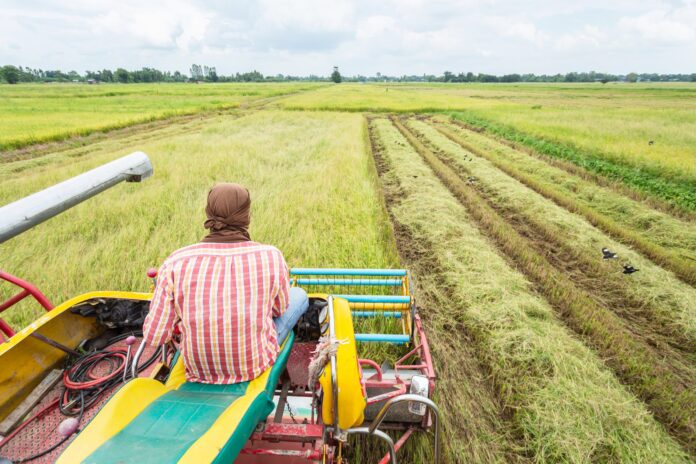 Agric-focused lender, Unity Bank Plc has partnered Nigerian rice farmers under the aegis of Rice Farmers Association of Nigeria, RIFAN to unveil a mega rice pyramid on the occasion of the National Rice Festival held in the Federal Capital Territory, Abuja on Tuesday.

The event, which coincided with the flag-off of the dry season farming, was used to showcase the gains produced by rice farmers in driving self-sufficiency in rice production through the Central Bank of Nigeria’s Anchor Borrowers Programme, ABP.

Speaking to newsmen at the event, the Managing Director/Chief Executive Officer of Unity Bank, Mrs. Tomi Somefun, while going down memory lane on the support of the rice farmers by the Bank since the inception of the Anchor Borrowers Programme, ABP commended the rice farmers for their unwavering belief and collaboration in the implementation of the intervention programme, adding that as the PFI (Preferred Financial Institution) for the ABP transactions, the Bank will continue to support the farmers and ensure that more smallholder farmers get the requisite financial support to boost rice production.

She said: “Our strategic partnership with RIFAN started in 2018 when we financed about 273,000 smallholder farmers. This was the largest single-ticket transaction in that year. This financing cut across 33 states of the Federation including the FCT.

“In 2019, the Bank increased the tally by financing another 146,810 smallholder farmers for the wet and dry season farming. This funding cut across 35 States of the Federation including the Federal Capital Territory (FCT).

“Additional funding was granted to finance additional 221,450 smallholder farmers of the Association across the 32 states of the Federation including FCT for the wet season and additional 300,000 hectares was financed in sixteen states for the 2020 dry season cropping season.

“As of March 2021, the Bank has financed no fewer than 190,000 smallholder rice farmers across 35 states including the FCT, Abuja.”

Speaking further, she said: “The rice pyramids we see here today is an example of the resilience of the farmers and should be replicated in all states with a focus on the crop they have a competitive advantage.

“As we gear the programme towards deepening its penetration to reach more farmers, we encourage all beneficiaries of the Intervention Programme to always utilize the inputs judiciously in order to key into Federal Government’s goal of attaining food sufficiency, diversification of the economy from oil, job creation for the teeming youth and poverty reduction”.

“We remain optimistic that RIFAN under the able leadership of the National President, Aminu Goronyo, will continue to engage its members to drive higher performance under the ABP.”

Through the strategic initiative of the ABP, Nigeria has made incredible gains in rice production over the past six years raising production to significant levels.

Similarly, the average capacity utilisation per annum of domestic integrated rice mills has jumped to 90 per cent, from the 30 per cent that was the case in the era preceding the advent of the ABP.

Statistics show that there has been a significant reduction in the country’s rice import bill, from a monstrous $1.05 billion prior to November 2015, to the current figure of $18.50 million, annually. The programme has also created an estimated 12.3 million direct and indirect jobs across the different value chains and food belts of the country.