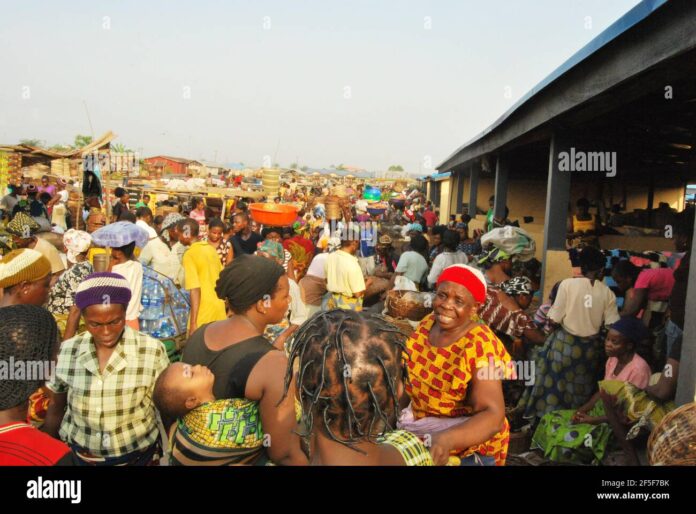 Traders of Ochanja Central Market, Onitsha have commended Anambra State  Commissioner for Commerce, Trade and Wealth Creation,Chief Uchenna Okafor over the appointment a new Caretaker Committee Chairman for the market.
The market has been under the leadership of  one Chief Nelson Ojukwu who has ruled the market  for more than six years, both as a democratically elected Chairman and Caretaker Chairman for two years.
It was wild jubilation at the market last weekend as some groups of traders marched round the market  in solidarity on hearing the announcement of the appointment of the new market leader,Hon.Sunday Aniakor
Ironically,Hon.Aniakor is an aspirant to the market election which is scheduled to hold in March this year.
Ochanja Central Market which suffered a devastating fire out break a few years ago when a section of it was gutted by inferno alongside some plazas around the market has been clamouring for a change of leadership for sometime now.
However, the new leadership headed by Sunday Aniakor is expected to initiate positive changes that would lead to restoration of much elusive peace in the volatile market.
The past leadership of the market had been accused of high-handedness and not listening to the voice of traders.
Hon.Aniakor who is also contesting the forthcoming market election for the Chairmanship position told our correspondent at the weekend in Onitsha that he was chosen among other contestants to restore peace to the market by reconciling all warring parties.
He explained that it was a difficult task,but with dedication and cooperation of his new executives the task must be actualised.
He told our correspondent in an interview that he was ready to leave lasting legacies in Ochanja Central Market during his stay as the market Chairman.
A trader and one of the Patrons,Chief Oliver  Nwankwo commended the State Commerce Commissioner, Chief Okafor for appointing Hon.Aniakor as the new market leader to douse leadership tension in the market, adding that the new Chairman was a good man who is out to better the lot of Ochanja traders.