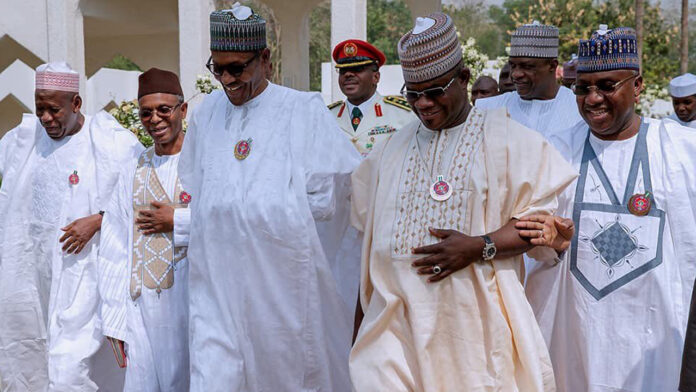 There are indications that there could be imminent  showdown between the Federal Government and the 36 states governors over the decision of the former to continue paying for fuel subsidy against the wishes of the governors, businessnews revealed

The Federal Government, it would be recalled, had capitulated to the demands of the governors that fuel subsidy be scrapped late last year when it only made provisions for fuel subsidy for the first six months of the year in the 2022 budget, after which the sector would be completely deregulated and petrol sold at the normal market price.

However, Nigerians, especially the labour unions kicked against the plan, threatening to shut down the nation without notice should the government go ahead and increase the pump price of petrol. The Nigeria Labour Congress (NLC) had scheduled massive protests across the 36 states of the federation last Thursday, to be followed by a massive protest in Abuja on February 1 before the were suspended after government’s intervention.

Rattled by the growing public outcry and stiff opposition from Nigerians, especially labour unions against the planned removal of subsidy, the Federal Government again backtracked on its resolve to end the subsidy regime.

Announcing the decision of the government to State House Correspondents after last Wednesday’s Federal Executive Council (FEC), the Minister of Finance, Budget and National Planning, Dr. Zainab Ahmed, said the subsidy regime had been extended by another 18 months, and that the Nigerian National Petroleum Corporation (NNPC) had submitted a N3 trillion budget to take care of it in 2022.

According to the minister, only N443billion is currently available in the 2022 budget meant to cater for petrol subsidy from January to June. This, she said, forced the FEC to approve a year-long provision for subsidy in the new year.

“We also presented to council today a request for council’s consideration to make additional funding provisions to enable us to meet incremental fuel subsidy request in the 2022 budget.

“You’ll recall that in the 2022 budget, as appropriated, we have made a provision of N443billion for a subsidy for January to June.

“Having taken into account the current realities; increased hardship in the population, heightened inflation, and also that the measures that needed to be taken to enable a smoother exit from the fuel subsidy are not yet in place, council agreed that it is desirable to exit fuel subsidy.

“The Nigerian National Petroleum Company has presented to the ministry a request for N3trillion as fuel subsidy for 2022. What this means is that we have to make an incremental provision of N2.557trillion to be able to meet the subsidy requirement, which is averaging about N270billion per month,” Ahmed stated.

But the decision of the federal government did not go well with state governors who are not happy with the continued fall in the funds allocated to them from the federation account owing to the Federal Government’s unilateral withdrawals from FAAC to pay subsidy.

The NNPC, BH gathered, had not contributed a dime to the Federal Account Allocation Committee (FAAC) since May 2021 due to payments to cover subsidy on petroleum imports.

The sustained withdrawals from FAAC for subsidy payments, our correspondent gathered, had seriously impacted states’ revenue, with many of them finding it difficult to fund capital projects and pay workers salaries. Even states that are paying have not been able to pay as at when due, with the exception of Lagos, Rivers, Anambra and few others that pay regularly.

Not happy with last Wednesday’s decision by FEC to retain fuel subsidy beyond June 2022, state governors under the umbrella of Nigeria Governors’ Forum (NGF) at the weekend blasted the NNPC for mismanaging the fuel subsidy regime.

The Chairman of the NGF, Governor Kayode Fayemi of Ekiti State, while stating that the forum doubted NNPC’s fuel consumption figures, insisted that it had become necessary for the corporation’s estimates to be carefully verified.

The NGF, according to a statement by it’s Head, Media and Public Affairs, Abdulrazaque Bello-Barkindo, said the NGF agreed with labour leaders that the gap in the subsidy removal agenda was hidden in the untruth bandied by the administrators of the subsidy.

“Fayemi told the labour leaders that subsidy removal had remained an ongoing conversation not just among governors but the country at large and emphasised that governors could not but be part of the solution providers in this onerous task that is confronting the nation.

“There are raging questions of accountability associated with subsidy removal in the country and observed that the NGF and the NLC can jointly work together to proffer solutions that heal the economy and provide succour to the Nigerian people.

Fayemi also alleged that there is a lot of fraud in consumption and distribution figures presented to FEC and FAAC by the NNPC.

“We need a partnership with the NLC to confront the challenges of what the NNPC is about. Because there is a lot of fraud in the consumption and distribution figures that the country is getting and we can only move forward if the NLC engages all those who are knowledgeable in the field like PENGASSAN (Petroleum and Natural Gas Senior Staff Association of Nigeria) to conduct a thorough research into the sector before any further action is taken on subsidy”, Fayemi admonished.

Also speaking against the extension of the subsidy regime, Governor Godwin Obaseki of Edo State, warned that the nation should stop playing the ostrich and take concrete actions to end fuel subsidy. In its same vein, the Delta State Commissioner for Finance, Mr Fidelis Tilije, warned that state governments would no longer tolerate the deduction of funds at the Federation Accounts Allocation Committee.

“Now, everybody is shouting subsidy. Nobody is able to question exactly where these subsidies are being paid to. Who are the people consuming the fuel?

“All the funds we have spent to revive our refineries, what has happened to them? Has anybody got to check how corruption is taking away the funds? Why are refineries not working? “When this government told us that it was going to revive our four refineries in Nigeria, why haven’t it been able to revive just one or two? That is the point we are making.

“The truth is that as the price of crude oil goes up in the market, and then, you import the refined one, you will be paying double of what you are exporting.

“The truth is that we are not able to ascertain whether we are paying the actual subsidy we are consuming. All we are doing now is that NNPC will just sit down and tell us this amount of subsidy we are going to pay next month and they will deduct the money.

“Who is questioning them. Who is checking? We will not tolerate this act. We will continue to engage them. Can’t they block all the loopholes?” Once we get all these done , the issue of subsidy will no longer be there,”