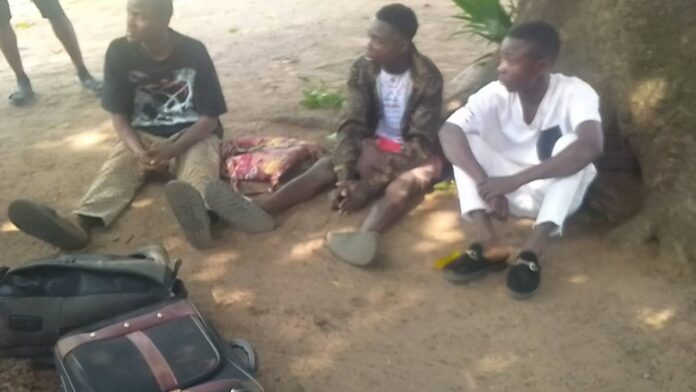 Nigeria has now become a world ruled by blood, sacrifice and death; a world in which young men, sometimes as young as 15, do unspeakable evil in the belief that money is made from performing human sacrifices, and for the most part, they escape the headlines.

Internet fraud, or simply Yahoo-Yahoo, took root in Nigeria with the emergence of the internet and its prevalent use from around 2005/06. It was when a new crop of big boys known as Yahoo boys began to emerge; young men who defrauded mostly European and Americans in love scams, with Benin as a hub.

But soon it spread, like wildfire, across the country, and graduated from mere posing as American soldier in Afghanistan, a widower in desperate need for life partner, etc, to full blown ritualism, hacking and fraudulent investment schemes, all of which are ecaplulated in a term known as Yahoo Plus (Yahoo+) or G+.

Fortnight ago, two teenage boys, Soliu Majekodunmi (18) and Mustakeem Balogun (19) were caught while boiling the head of a 17-year-old girl, Sofiat Kehinde, at Oke Aregba area of Abeokuta, Ogun State. They confessed to have murdered her for ritual purposes, an incident that jolted many Nigerians. But it’s not an isolated incident.

About the same time, 32-year-old suspected internet fraudster, Afeez Olalere who was arrested by operatives of the Lagos State Police Command, confessed that his mother encouraged him to kill his younger brother for money rituals.

“My mother took me to a herbalist who told me if I want to be successful in the yahoo business, I will have to sacrifice one life and that person must be a sibling to mine,” he had said, revealing that his mother encouraged him to kill his 21 year-old brother which he did with the help of a poison.

Mostly at the receiving end of the menace are young girls who are lured with money and used for ritual through sex. The practice according to many accounts, is that the ritualists deposit their sperms into the unsuspecting girls who either become barren for the rest of their lives or rot away gradually.

Upon interrogation, the two men who confessed to murdering the lady for ritual. According to them, it was not their first. They admitted to having killed as much as 70 women as they specialized in getting female parts and one Abefe Sadiq who pays them N600,000 for each part.

Asked how they get these girls, they said, “getting the girls was so easy. We lure them with money and fancy things.”

There is yet another dimension. Our investigations revealed that some travelled all the way to Uzo Uwani in Enugu State where they bury live cow.

“They go to a place to go to in Uzo Uwani,” a source familiar with the practice confided on our correspondents on the condition of anonymity. “When you go there, you get a form for $1000. And after that, the conditions will be tabled before you, which include burying a live cow. If you are ready, you proceed. Burying the cow will have implications, of course. It cannot be for nothing. Some other things that are more grave may happen.”

Though Nigeria’s anti corruption agency, the Economic and Financial Crimes Commission (EFCC), has continued to present itself as fighting the menace of internet fraud by, among other things, posting photographs of suspected fraudsters on their various social media platforms, as well as routinely invading hotels in search of the fraudsters, our investigation revealed something different.

Many sources, including lawyers who have served as counsel to accused fraudsters and the fraudsters themselves told our correspondents that officials of the anti corruption agency routinely collect bribes and destroy cases of arrested suspects, which according to them, partly explains why the menace is not abating.

They alleged further that the night raids at hotels and the publishing of names of suspected fraudsters on social media are all part of media propaganda to present a different image of themselves to the public.

“EFCC knows all those things. What happens is that when they succeed and money comes in, often huge sums of money, the bank will flag it and EFCC will probe the account and start tracking the person,” an Enugu based lawyer who has worked as a counsel for a number of the fraudsters told our correspondent on condition of anonymity to avoid being victimized.

“Of course, they know where almost all of them are living. Whenever they want to take any of them, they will just go there and pick them,” he said.

Speaking of the ritual practice that drives the Yahoo industry, an old woman said, “From the ritual point of view, it’s made me to be careful about everybody. I’m scared of human beings these days. The whole thing is just assuming the ugliest of dimensions..

“People can argue logically that there is no way ritual can bring money. That is true within the context of logic. But if it doesn’t bring money, they won’t be going into it. That you don’t believe in God, for example, doesn’t mean that he doesn’t exist. His existence is not dependent on whether or not you believe.

“The ritual thing works for them, whether we agree or not. What I heard is that when they are done with that, they can command those people to pay them and they will comply. It’s not unlikely that it doesn’t work, because you see them making a lot of money doing those scams. And typically those who do those rituals are mostly those who make money in the business.”