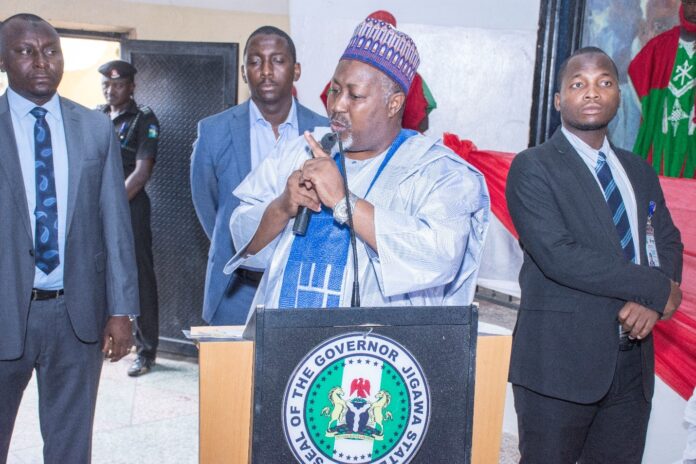 Jigawa State Governor, Alhaji Muhammad Badaru Abubakar, has assured Jigawa citizens and investors that his administration will continue to support private investors such as WACOT Limited whose investments are contributing to the state’s socio-economic development while boosting Nigeria’s food security.

During his inspection, the Governor expressed joy at the progress made by WACOT over the past five years in Jigawa. He stated that WACOT Limited commenced its Jigawa operations in 2016   by buying sesame from farmers through a pilot out-grower scheme with a few hundred farmers. This scheme has now grown to capture over 6000 farmers in Gumel Emirate.

He added that when WACOT decided to expand and diversify into organic sesame farming two years ago, the state government readily provided over 500 hectares of land because it was confident the company would improve the welfare of farmers and boost the state’s economy.

Governor Abubakar said, “Not only did they commit to creating an organic sesame farm, but they also committed to creating a Farmers’ Academy, a drip irrigation section, a sesame cleaning plant and warehouses. As you can see, the entire project is nearly complete – in fact, some of the areas are already in use.

“The primary one is the organic sesame farm, which is operational and now certified by an international body ‘ECOCERT’, meaning sesame grown on our land is internationally recognized and approved for export in Europe and America. “

He appreciated the company’s tenacity and dedication, noting that judging by what he saw from the inspection, the site is about 95% ready.

“We are happy with this progress. Already, the [organic farm] facility has engaged more than 500 people from here in Jigawa in various capacities. We also have many suppliers from the state providing one service or the other at the site. We are pleased about this development and look forward to full operation.

“WACOT has not only been a business partner, but in many aspects, they have done many CSR activities which have benefited our people” the Governor said.

He disclosed that Jigawa had been home to WACOT for several years and that it had, during that period, partnered with the farmers to develop the sesame value chain.

“In the last five years alone, we have mobilized over 6000 farmers and organized them into cooperatives, disbursed over NGN 1 billion in the form of input credit financing (such as fertilizers, agrochemicals and seeds) to them, provided guaranteed market through a buyback arrangement, and trained them on critical farming techniques such as Good Agricultural Practices, yield enhancement techniques and provided routine farm advisory & extension services. In this period, we have recorded tremendous results in recovery,” he said.

He said WACOT decided to invest in a certified organic sesame operation in Gumel as part of its commitment to sustainability and that the project comprising 450 hectares for organic sesame farm, 50 hectares for Drip Irrigation site, warehouse and processing plant for cleaning, and a Farmers’ Academy is at 95 per cent completion.

The COO, who disclosed that WACOT intends to commence by April 2022, said the farm had already received the broadest scope of international certification.

“This organic certification will give Jigawa, and ultimately, Nigerian sesame, access to the lucrative international markets in Europe, US, Canada, and Asia,” he said.

Nanda, who expressed pride that WACOT is the first company in Nigeria to successfully scale through all the audit stages and meet all requirements to achieve the certification, affirmed its commitment to supporting and implementing effective policies, programs and resources to improve the livelihoods of farmers in Nigeria.

“The goal is food security, and we will contribute our quota to ensuring it is attained,” he said, adding that WACOT would continue to create jobs in Jigawa and across Nigeria.