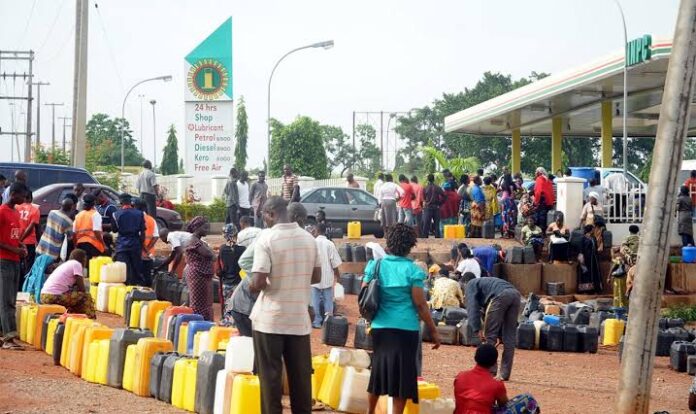 Amid the economic hardship ravaging the entire nation, sources of livelihood in the Federal Capital Territory Abuja and kogi State seem to be threatened following the incessant scarcity of Premium Motor Spirit, PMS, popularly called petrol.

A check by our correspondent on Sunday revealed that while some fuel stations remain shut for lack of the product, some of the stations along Zuba are selling above N250 per litre, a development that has made transportation difficult for residents.

The long queue in most fuel stations in the territory are worrisome as motorists continue to lament the difficulty in getting the product.

According to the Federal Government, the queue which resurfaced two weeks ago, was birthed by the flooding situation which made roads in Lokoja, Kogi State, impassable.

Correspondent who visited some filling stations in Okene on Sunday, reports that the current scarcity of fuel in Lokoja, the Kogi State capital, has extended to Okene, with major filling stations without fuel to dispense to motorists.

In a few filling stations where fuel was sold, it was at a cost of at least N230 per litre, while some drivers said the price could be as high as N270 in other filling stations in the area.

Commenting on the development, a Lokoja-Okene bound commercial driver, Issa Mohammed, described scarcity of fuel in Okene as worse compared to Lokoja, where the product is sold between N220and N225 per litre.

“The current hike in the price of fuel, especially in Lokoja and Okene, is fast going beyond the purchasing capacity of an average commercial driver to cope with.

“Hardly can any commercial driver in Lokoja and Okene can boast of making a tangible profit at the end of the day’s business as all our proceeds go for the purchase of fuel which continues to hit the roof,” Mohammed said.

“Many of us are still in job because we have no other profession to fall back to, not that there is much profitability in the job again.

“We will be happy if the government can help us check black marketers in the fuel business so we can at least make some profit or break even in this business.

“The terrible hike in motor spare parts, accelerated wear and tear of our vehicles, and bad road are also issues giving us sleepless nights as much of our proceeds go for the purchase of spare parts and repairs of our vehicles.

Mohamed’s colleagues, who aligned with his observation on the issue, called on the federal government to supply more fuel to the filling stations as a natural way of forcing down the price of fuel to the official level.

Commercial and tricycle operators in Lokoja and Okene are not spared, as they have also hiked their services by 50 to 80 percent, citing the skyrocketing price of fuel.

Some passengers who also complained of the hike in transport fare, in separate interviews, called on NNPC limited to direct its searchlight on shylock dealers selling fuel beyond the official pump price of N179 per litre in the area.