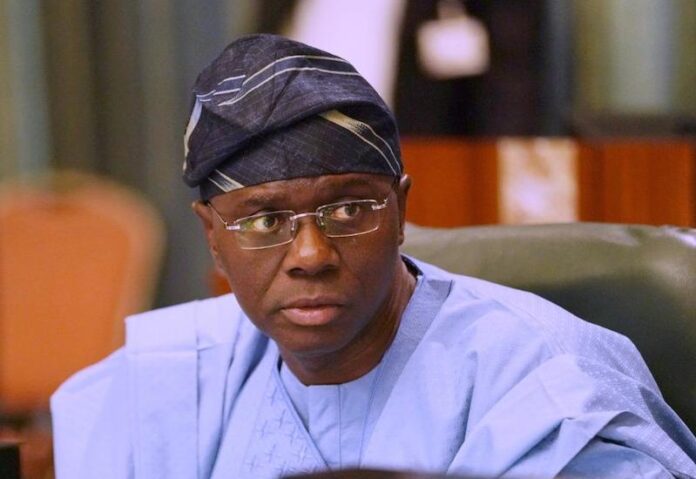 The 1,786 farmers, including women, youths and Persons With Disabilities (PWDs) were empowered under the APPEALS Project to execute their approved Business Investment Plan, which has a provision for the employment of at least one person.

APPEALS Project is a tripartite agreement between the Lagos State Government, the Federal Government and the World Bank.

Speaking during the presentation of cheques worth N3.6billion to 1,738 beneficiaries of APPEALS Project at the Blue Roof, Agidingbi, Lagos, Governor Sanwo-Olu reiterated his administration’s commitment to providing an enabling environment for agricultural productivity and new employment opportunities.

The Governor said the construction of 13.16 kilometers of Farm Access Roads embarked upon by APPEALS Project in four locations and farming clusters namely; Araga Farm Settlement, Igbodu and Poultry Cluster in Epe; Erikorodo Poultry Estate in Ikorodu and Afowo in Badagry, would be completed by June 2022.

He said: “We are strongly committed to enhancing the agricultural productivity of small and medium-scale farmers in Lagos State, and improving value addition along with our agricultural value chain, which are the core objectives of the Lagos APPEALS project.

“Agriculture offers our people, especially our youths, an opportunity to make a difference, especially through effective deployment of technology in the sector, for improved productivity and the attainment of our food security and safety goals on one hand, and our job creation agenda on the other. I am a strong believer that the increased involvement of young Nigerians in agriculture will help tackle various long standing challenges facing the sector.

“As an administration, we are fully cognisant of our responsibility to create an enabling environment for all of these new ideas, innovation and technologies. This explains the seriousness with which we have embraced APPEALS in Lagos State and the determination with which we have been implementing it.”

Speaking on agriculture and business opportunities in Lagos State, Governor Sanwo-Olu said there are immense opportunities for agro-processing and industry in the State being the largest subnational market for agricultural goods and services in the country.

“I find it intriguing that a lot of people do not associate Lagos with agriculture, perhaps because of our megacity status and limited land resource. I must say that such a perception is not an accurate reflection of our potential and actual performance.

“For example, by virtue of our abundant water resources — as much as 20 percent of the State is made up of water — we are a natural hub for aquaculture. Lagos is also home to several legacy farm settlements and agricultural estates, which we are remodelling and reviving.

“We also have immense opportunities for agro-processing and industry, in addition to being the largest subnational market for agricultural goods and services in the country. Most of you will be aware that we are currently completing in the Ikorodu area of the State, what will be one of the largest rice mills in Africa. It will serve the entire country and potentially the West African sub-region,” he said.

The Governor while expressing Lagos State’s commitment to APPEALS Project, said since the inception of the Project, the state had been steadfast through regular payment of its counterpart funds, saying Lagos is committed to turning Epe and Badagry into food markets.

He said: “In the spirit of inclusiveness, I am happy to note that in the implementation of APPEALS, Lagos State is guaranteeing that 10 percent of the beneficiaries will be Persons With Disability, in excess of the five percent suggested in the project implementation plan.

“Lagos State Government also remains fully committed to its obligations under all Donor/World Bank Assisted Projects through regular payments of our counterpart contributions, as well as providing capable human resources for the successful implementation of these projects.”

Governor Sanwo-Olu urged each beneficiary and group, who got between N1million and N8 million, to exceed expectations in executing their business plans, excel and become employers of labour, as well as setting standards for subsequent participants in the project.

“To whom much is given, much is expected. Go out there boldly, exceed expectations, and set inspiring standards for all those coming behind you. The sustainability of APPEALS is greatly linked to the scale of your success as pioneers,” the governor advised.

Speaking earlier, the Commissioner for Agriculture, Ms Abisola Olusanya said the target of the APPEALS Project was to increase participation in agriculture and improve production and marketing opportunities of the value chains.

She said in a bid to increase youth participation to take over the aging population, the State Government has continued to introduce strategic measures of modern provisions to make agriculture appealing to youths.

“It is pertinent to note that the project is directly contributing to the Sustainable Development Goals (SDG) as well as the THEMES Agenda of the present administration of Mr. Babajide Olusola Sanwo-Olu by exploring and investing in the use of innovation and technology to create competitive advantage in ensuring that Lagos attains a 21st-century economy.

“APPEALS project intends to harness the skills and strength of our youths, increase their productivity and unleash their economic potentials by fostering job creation along with the segments of production, processing and marketing of the targeted value chains,” she said.

He promised that the Federal Government would continue to support the State by providing the needed oversight to ensure the success of the programme in Lagos State.

Jobdi said as a key component of the APPEALS Project, WYEP is directed to project gender equality and youth engagement towards achieving sustainable development goals, and among others, develop structures for economic diversification.